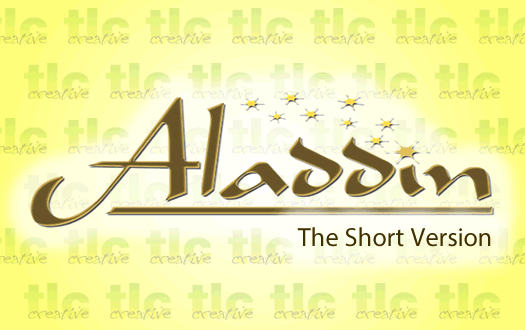 A cut down, one act version of the popular Aladdin story written for a small cast and simple / minimal set and props.

The traditional tale featuring a reduced cast of just Widow Twankey (who also narrates), Aladdin, Princess Jasmine, the wicked Abanazer, a Slave of the Ring and a magical Genie of the Lamp.

Can be performed by as few as four actors with doubling.

This was originally written for Thomson Holidays to be performed by their holiday representatives in resorts around the Mediterranean over Christmas 2008.

Also available with this script free of charge: Full set of downloadable sound FX as listed in the script and downloadable signs to set each scene